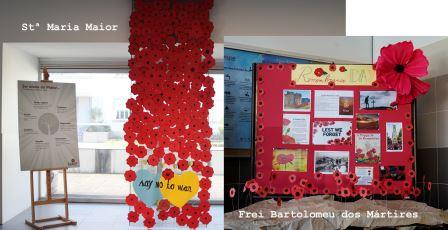 On the 11th November, Poppy Day was celebrated both at Frei Bartolomeu dos Mártires School and at Santa Maria Maior Secondary School, as a sign of respect for all the soldiers who died in World War I, and also in so many other devastating and incomprehensible wars that have happened worldwide. Unfortunately, this is a present reality, due to the war that has been taking place in Ukraine for the last nine months, as a result of the Russian invasion.

At the entrance of both schools there were charts with information about this day and touching messages for peace written by the students.

Remembrance Day, also known as Armistice Day or Poppy Day, is celebrated to honour the end of World War I, which occurred at 11a.m. on the 11th day of the 11th month in 1918. Remembrance Day traditions include the wearing of poppies and a two-minute silence exactly at 11 a.m. of the 11th November. Besides, many wreaths are laid at national and local war memorials, where official ceremonies are held. The Poppy became the symbol of the Armistice, because, according to the British Legion official site, “Bright red Flanders poppies however, were delicate but resilient flowers and grew in their thousands, flourishing even in the middle of chaos and destruction”. This flower inspired Lieutenant John McCrae to write his remarkable poem: “In Flanders Fields”:

“In Flanders fields the poppies blow